Branding A National Treasure
Coca-Cola – Take down that ugly sign!

As I wrote in a recent post, Sports Branding, when a company brands its name on something, it is the same as a cowboy branding a cow: the intended message is, “This cow belongs to me.” 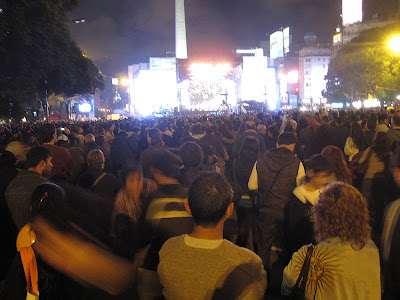 Argentina just celebrated its 200th birthday, its Bicentenario. On the big day, 3,000,000 Argentines celebrated near the Obelisco, a 660-foot monolithic cultural and national icon in the Plaza of the Republic, in Buenos Aires. The national flag was first flown on the site in 1812. Media stories about Argentina almost always include photos or video of the monument.

I was privileged to be in that crowd of 3 million and to witness the passion and love Argentines have for their country and its traditions. A great celebration of a great people. It was awesome!

During the 7 years I lived on Capitol Hill in Washington, DC, I often walked my German Shepherd, Morgan, on the Mall where the Washington Monument and the Jefferson and Lincoln Memorials all stand proudly, surrounded by acres of grass and hundreds of trees. Americans protect these hallowed places because they are part of our patrimony and we would be outraged if huge commercial signs were erected on our Mall. We don't allow bright, colored, flashing soda pop signs next to the Washington Monument. Nor do we allow fluorescent yellow arches to bathe the Viet Nam Memorial in color. Although they interrupt our movies, sports events and news shows with their tasteless messages, even the crassest business people draw the line when it comes to national treasures.


But they don't draw the line in Argentina. McDonald's purveys its fat-laden food with garish, brightly-lit yellow arches right next to the Obelisco, but Coca-Cola has far outdone the arches! It has saturated the Obelisco site with an ugly 7-story, 600-square meter, 24-hour, animated explosion of color, light and bad taste promoting its heavily-sugared drinks.Why is it different for U.S. companies here in Argentina? Why do McDonald's and Coca-Cola show so little respect for the cultural and national patrimony of Argentina? 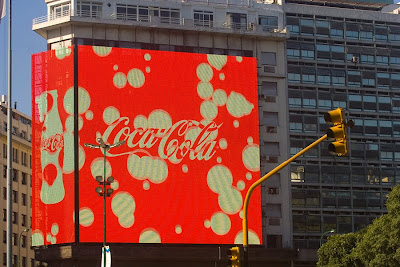 This is a branding very similar to cowboys branding their cattle. It is an effort on the part of these two companies to put their brand on the treasured site of Argentina's national Obelisco, to connect their brands with Argentina's best-known icon. Coca-Cola even created a Facebook page on Argentina's 200th birthday: Esquina Icónica Coca-Cola Obelisco Buenos Aires (Coca-Cola's Iconic Obelisc Corner). Using the word iconic, connecting Coca-Cola and the Obelisco in its Facebook name, and starting the page on the nation's birthday reveals much about Coca-Cola's branding intentions.
Before we go any further, I have to come clean. I already had a negative opinion of these companies before I saw their bad taste displayed next to one of Argentina's national treasures. The U.S. has a serious problem with obesity - between 16 and 33 percent of U.S. children are obese. Argentina is not immune to this deadly health issue. At the heart of the problem in the U.S and Argentina, you will find these two companies, both aiming their advertising at the young. With the permission of misguided school boards and parents, both have a major presence in U.S. school systems as obesity rates among children skyrocket.

To protect our kids from harm, we tell them not to take sweets and gifts from strangers but these companies make immense profits by doing just that! They lure children into unhealthy food habits with gifts, sugar, caffein and fatty foods. Obesity and smoking both cause great numbers of deaths. We've curtailed some of the tobacco companies harm to children - we need to do the same with these other - let's be honest - child abusers. 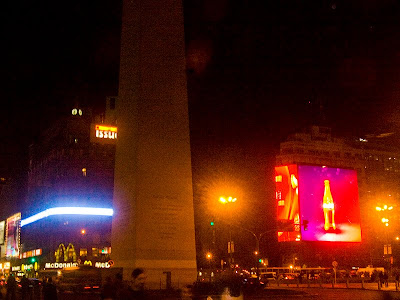 The real effect of Coca-Cola's branding at the Obelisco can't be appreciated during daylight. You have to be there after the sun goes down. (or click YouTube to see it now) Its strobe-like glare absolutely dominates this cherished place of Argentine national pride with bright red and white logos, bubbles and bottle caps. It's almost impossible to see the Obelisco from the opposite side of the street because the sign's flare is so great it puts the gigantic icon in shadow. I had difficulty getting a photo because the assault of light kept overexposing the shot. The light is so strong that an airline captain told me the flashing red sign is difficult to ignore from the cockpit at 8,000 feet!

There are other commercial signs on buildings near the Obelisco but leave it to us Americans: we know how to make the biggest splash. Coca-Cola and McDonald's, you embarrass me, you embarrass our country, and your outlandish displays of bad taste offend every person subjected to the irritating light from your vulgar signs.

But, worst of all, at a very deep level, at that place where we all express our love for culture and patria, you show no respect or reverence for this symbol of Argentina. Your sign says to every Argentine that you have enough money and power to do anything you want, including polluting and branding the site of a national treasure. 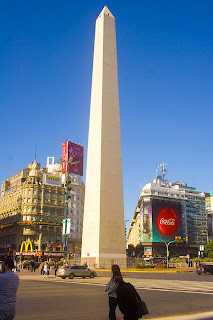 Your insensitive displays in this honored place suggest that Americans are only interested in making money, but that is absolutely not true. We have strong life values that are not for sale and, pay attention Coca-Cola & McDonald's, we penalize companies that reject these values. We especially don't cotton to companies that harm our children. It's time you both make some changes. Some big changes!
Coca-Cola take down that ugly sign!
You can't brand the Obelisco because you don't own it.
McDonald's – create a dignified sign!
If you want to do business next to a national treasure, be respectful. Hide your yellow arches and garish lights from photos taken of the Obelisco.

I invite you to consider my recent book, Touching The Rainbow Ground - 8 Steps To Hope.  You may find it at lulu.com as a print or e-book. Amazon.com has the Kindle and iBooks has iPad, iPod, and iPhone editions.
Posted by Rainbow Ground at 1:38 PM 2 comments