Buenos Aires and Washington
2: Glueless, Hubris and The 4 S's

My 3-part post continues about the failure of these two world capitals to become great cities by dreaming exciting dreams and converting them into clear visions. Both are in need of cataract removals to see their problems clearly and to create visions for all leaders and citizens to see and enthusiastically embrace.


When I lived in Washington, my Capitol Hill neighborhood in northeast lacked social glue. It was glueless! That is, there were few policemen, firemen, teachers, shopkeepers, etc., living in my neighborhood. Most of these folks lived in Maryland and Virginia and went home to these states every night. These are the folks who make neighborhoods work. They are the neighborhood leaders, watchers, helpers, friends, mentors, and models for children, the glue lacking in many Washington neighborhoods. 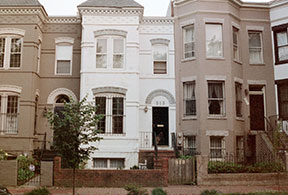 Townhouses on Washington's Capitol Hill. Three open-air drug operations functioned on this lovely block for many months – one block from a primary school.   Photo: Paul Weiss


What we did have were university students, transient Congressional staffers, homes with handicapped persons working in shelters, half-way houses for folks coming out of prison, all good people trying to make their way but not people committed to the neighborhood for the long haul.


A little aside on one small group of day residents. Since they didn't live in the neighborhood, school employees had no parking space when they arrived from their commute. Two schools near my home turned over their children playgrounds to parking areas for their staffs, leaving virtually no play space for hundreds of students. Cars over people, children too low in the pecking order, and glueless neighborhoods do not great cities make.


By contrast, although there are many cars commuting between the Buenos Aires Province and the City/ Federal District of Buenos Aires each weekday, it doesn't begin to compare to the mass migration to Maryland and Virginia at the end of each workday. Buenos Aires has many beautiful neighborhoods occupied by millions of porteños who work in, live in, and love their city. It makes all the difference. 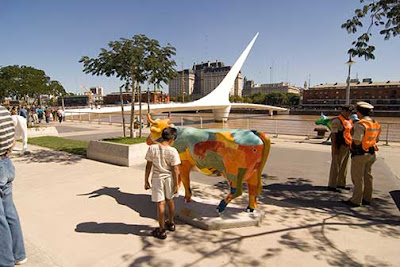 Argentina's Minstry of Defense (center background) next to the Casa Rosada and Puerto Madero, a tall building that doesn't occupy a vast campus and is integrated with other city structures.    Photo: Paul Weiss


Washington, the city, has another great disadvantage: it is home to the leadership infrastructure of a nation of over 300 million people whose leaders and planners believe it needs massive bureaucratic campuses like those of the Pentagon, CIA, FBI, Congress and Homeland Security, etc., to govern well. And since America, with its 800 military bases worldwide (many with golf courses!), its massive production of war machines and frequent wars, its chain of mega-embassies and its tens of thousands of nuclear bombs, has assumed the world's police role, it requires even more buildings and more massive buildings (see my first post on short blocks and mixed-use). Such an infrastructure requires millions of people to support it. The cost to the nation and the physical impact of all this hubris on a small city of 600,000 residents is overwhelming. Just as cars rule the planning pecking order, the national interest of this massive presence trumps neighborhood interest or any other interest!


Is hubris too strong a word? Well, then, compare the sorry state of Washington's public schools to the luxury of the U.S. $700 million, 100+ acre campus of the Iraq embassy (larger than the Vatican) and see if a better word comes to mind. And the impact of this hubris on a city of 600,000 is not limited to its huge physical presence. It includes hundreds of thousands of federal employees (with their cars) who are part of the 480,000 federal, city and other workers who work in the city but live outside it. Add to it the tens of thousands of other vehicles needed to provide the food, mail, furniture, light bulbs, cement, lumber, etc., to build and support the places where the 480,000 work. This massive army expects roads, health, fire, police and other services but most don't pay income tax to the city that provides the services. Hubris has a very high price tag for the nation and for the city of Washington: every dollar the city has to spend for these daily “legal aliens” takes away quality from the lives of Washington citizens and vital education dollars from its children. As do the chain of embassies, the militant policing of the world with 800 military bases, arms production, the frequent wars and the nuclear arsenal. And money is not the most important cost. (See my video, Teen Soldiers)


Buenos Aires is the capital of a country with 40 million people. Argentina has no global chain of military bases nor has it assumed a global police role. It has no huge embassies or nuclear bombs. Even its 67-meter Obelisco is overshadowed by its look-alike cousin, the 167-meter Washington Monument. The federal physical plant, like so many other businesses and services, is spread out and integrated with other city structures and neighborhoods. And most of its workers work and live in Buenos Aires. Argentina doesn't have the hubris of a superpower.


It has something better. It has tango. And asado. And malbec. And besos and abrazos. Dancing, barbecuing, enjoying world-class wine and greeting each other with a kiss and an embrace beats nuclear bombs every day of the week. 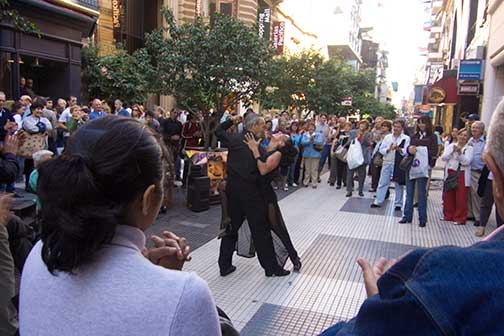 
Washington does a far better job of controlling commercial signage than does Buenos Aires. The Argentines allow branding of everything in sight, including athletes. See my posting on Sports Branding The Argentine capital seems to have no problem tolerating ugly signs, posters glued on every open space (many from political leaders!) and graffiti beyond belief. See my video on YouTube: Coca Cola - Take Down That Ugly Sign 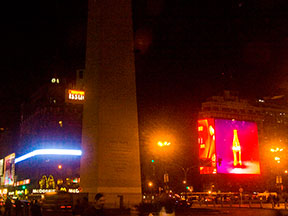 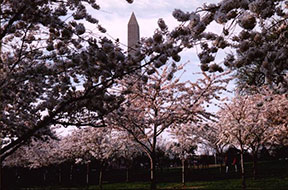 Coca Cola and McDonald's are allowed to pollute with their garish signs the area around an important national monument, the Obelisco, the place from which the Argentine flag was first flown. City officials had a party at the foot of the Oblisco and celebrated the lighting of the polluting Coke sign!!   Photo: Paul Weiss


I know that far fewer folks smoke in the American capital. Americans pay $4-5 a pack but cigarettes only cost $1.50 a pack down South. People committing slow suicide with tobacco doesn't seem like a major environmental issue until you wait for the signal to change at a busy Buenos Aires street corner and 2 or 3 people are filling the air with second-hand smoke. And, of course, most are young, a demographic well-targeted by tobacco companies. Needless to say, the streets and sidewalks are littered with cigarette butts. And when many adults smoke, good role models are not plentiful. I recently saw the head coach of the famous Boca Junior fútbol team, Julio César Falcioni, arriving at the airport and talking with reporters, a cigarette dangling from his lips, either oblivious or uncaring about his impact on the young!


Maintenance of Buenos Aires sidewalks is the responsibility of the property owner. Big mistake! The sidewalks, except in upscale neighborhoods, are a disaster. I hike on smoother trails in the mountains. When a construction company is repairing or building a new building, it totally trashes the sidewalks along the entire length of the project, sometimes for years. In the U.S., the city builds and repairs sidewalks using revenues from property taxes. They don't always do a first-rate job but, generally, they are safe and adequate.


Oh, I almost forgot the 4th S. I don't want to be indelicate so let me walk around it. The 4th S has to do with dogs and sidewalks. And let me say this right up front: I don't blame the dogs! I side with Dog Whisperer Cesar Milan who says that dogs don't have problems; their owners do. Sorry, porteños, you don't get my vote on this one. Washington has its dog-sidewalk issues, but Argentines take the cake. Or should I say they don't take the cake, and that's the problem? Well, you get my point.

And while we are on the subject of clean streets, in late 2005 the City Council of Buenos Aires passed a zero waste law that bans land filling of recyclable and compostable waste by 2020. Against the backdrop of “institutionalized” waste collection is an infrastructure of cartoneros, or waste pickers, possibly as many as 10,000 in the city, who do their recycling in front of shops and residences.

Daily cycle. The streets of many areas of Buenos Aires are pristine at 8:00 o'clock each morning because the merchants and the porteros of the apartment buildings sweep and wash the sidewalks with garden hoses. Then out come the dogs. Later in the day, sidestepping the dog droppings, folks start depositing garbage bags, sometimes large piles, on sidewalks. As day moves into evening, cartoneros, often with wives and small children, come down the streets, tearing bags open to get at recyclables. Recycling and income generation for impoverished cartonero families are admirable goals, but streets are scattered with filth many hours every day. Then, late in the evening, huge garbage trucks roar down the streets, picking up 95% of the debris from streets often indistinguishable from garbage dumps. The remaining 5% is swept up by an army of yellow-garbed sanitation workers who patrol streets with brooms and trash cans on wheels. Eventually, everything gets picked up. The sun comes up, the sidewalks are swept and hosed down by the porteros and everything is pristine, once more. Then out come the dogs ...

In Washington, waste pick-up in my neighborhood was done from alleys behind residences and neighbors were responsible for keeping front yards clean. A weekly street-cleaning by big street-sweeping machine took care of the streets. The system was never perfect but got the job done. And, then, of course, out came the dogs.

Paul Weiss founded and, for 30 years, directed Americas Children, an international nonprofit for children in North and South America. He recently published a book about his work, Touching The Rainbow Ground – 8 Steps To Hope. In 2011, he began a new journey on the rainbow trail, a global mission, The Rainbow Ground, to address the terrible challenges facing children everywhere.